Before we start: I do not condone any harassment to any entities listed in this post. Please do not harrass anyone.

A friend alerted me to the fact that fxtwitter, a service that helps people post Twitter links on Discord, has just gone belly up.

It was revealed that the entity behind it was doing some shady things that had triggered a lot of their service users. Trying to access the original tweet that started this storm gives you the following message:

However, thanks to my friend, I’m able to see what the original tweet was before the entity did damage control by making their tweets protected: 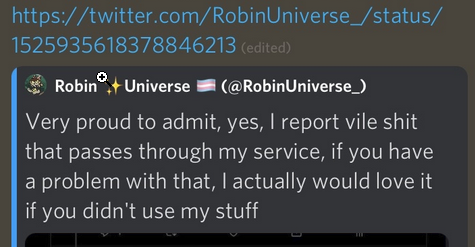 So basically, they can see what twitter posts go into the system while it’s being processed and report anyone who they have a bone to pick with. Some users popped the “isn’t this a violation of privacy?” flag, some were enraged.

The general gist of it is simply that fxtwitter operates by taking a tweet URL, parsing it and then returning it in a format that Discord or another chat system can understand.

Normally, if you just posted the twitter(dot)com link, it would show a embedded version. However, if the tweet was flagged as NSFW or potentially problematic, then it would just force you to view it on Twitter after logging in.

Fxtwitter worked around it by the service retrieving the original tweet, parsing its metadata (likes, retweets, when it was posted, who posted it, etc) and then generating embed data that Discord and friends could display without any bullshit.

This was extremely useful, because on mobile discord clients, you’d get an ugly “view this on twitter” embed vs the actual image or media that someone posted.

While I do understand the developer of the service wanting to try to keep “vile shit” (their words) from going through fxtwitter, fxtwitter should have never been the piece of the puzzle that dictates what goes through its processing.

Privacy is also a concern, as there’s been an alleged admission that they have been collecting your twitter profile data when you’ve used the service.

Ultimately, what the one thing that fxtwitter should have done and only done is simply translate ugly twitter embeds into cleaner ones, compatible with other non-Twitter social media clients.

I might be tooting my own trumpet here, but I could program a headless clone of  fxtwitter and have it process twitter posts without my intervention. It’s not my business to filter or sit in front of the console, looking at the tweets coming in and report ones that trigger me or are outright disgusting – that’s not the objective of the service.

The service should just do the following, and do it well:

Nowhere there should one of the steps be “filter for bad content” or “report because user bad”. If you have a problem with the content that someone posted, you should talk to the person who posted that content and work it out like adults.

It’s a damn shame that fxtwitter decided to go up in a dumpster fire, but alas, that is social media and when personal agendas and other shit get in the way of software development.

Until next time, Coburn out.

An australian who is one of the founders and lead programmers of Oiran Studio, a game development studio. I have a passion for anime, gaming and other subjects. I run this journal as a personal log of sorts, as well as expressing my thoughts and sharing knowledge.

My name’s Coburn and I do Australian-based IT tech support. When not dealing with clients, I’m usually developing open source software, playing games or working on my Oiran Studio game projects in my spare time.

All views here are personal views and are not of my business or other entities.

If you feel inclined, you may buy me a coffee at Ko-fi or get a free $100 60-Day credit at Linode via my referral link.

Thanks for stopping by!

Stuff I write about…